Burnley finally claimed its first victory in the English Premier League on Monday, 1-0 against a Crystal Palace missing star forward Wilfried Zaha after he tested positive for the coronavirus. Burnley finally claimed its first victory in the English Premier League on Monday, 1-0 against a Crystal Palace missing star forward Wilfried Zaha after he tested positive for the coronavirus.

Chris Wood scored in the eighth minute, latching onto a neat flick by strike partner Jay Rodriguez and sidefooting powerfully past goalkeeper Vicente Guaita from a central position.

The chance opened up because of a poor attempted clearance by Palace defender Cheikhou Kouyate, who misdirected a header straight to Rodriguez.

The win in Burnley’s eighth game allowed the team to climb out of the bottom three and into fourth-to-last place on five points.

Burnley winger Johann Berg Gudmundsson struck the crossbar at the end of a counterattack midway through the second half, while Palace struggled to create any clear-cut openings without Zaha, who appeared in each of the team’s last 59 Premier League games stretching back to February 2019.

“He has tested positive unfortunately for coronavirus so is self-isolating, and is awaiting the results of the next test,” Palace manager Roy Hodgson said before the game.

“He is not feeling particularly ill, but unfortunately the test proved (positive), and he is following the procedures.”

The best chance for Palace fell in stoppage time to substitute Christian Benteke, whose close-range effort was blocked by the outstretched left hand of goalkeeper Nick Pope.

Wood’s goal was Burnley’s first at home in the league, and only its fourth in total. 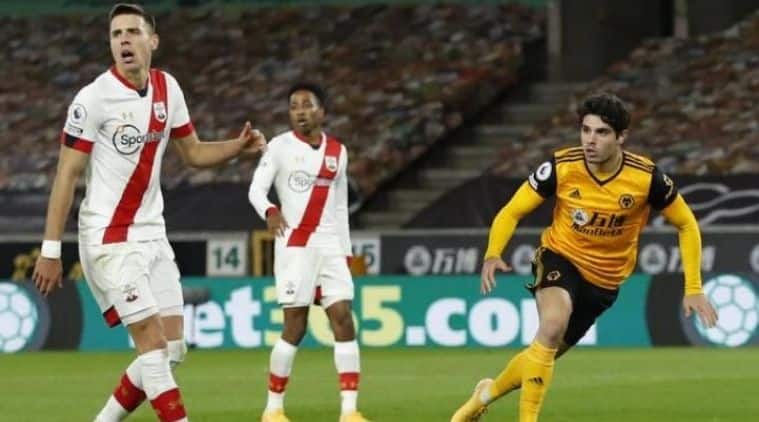 With defender Conor Coady’s run of 119 consecutive league games for Wolves brought to an end when he was ruled out due to a close contact testing positive for COVID-19, the hosts looked shaky in defence as they shifted formation to a flat back four.

However, it was Southampton’s Alex McCarthy who was the busier of the two goalkeepers and he made a fantastic double-save from Nelson Semedo and Leander Dendoncker to keep the game scoreless at the break.

With Danny Ings out injured, Walcott played as a striker alongside Che Adams and it paid off when he rattled home a Che Adams centre in the 58th minute to score his first goal for the club where he started his career since January 2006.

“It was a very tidy finish in the end, Che gave me the assist, I was pleased with my goal. It feels like a win, they play some fantastic football and it’s a really good point,” Walcott told Sky Sports following the final whistle.

The ex-Arsenal man spurned a great chance to make it 2-0 six minutes later and it was to prove costly as Wolves fought back, Raul Jimenez striking a post in the 75th after good work by Joao Moutinho before Neto reacted quickest to slam the ball home.

The home side had the better chances but there were no more goals and the stalemate leaves Southampton fifth on 17 points, three behind pacesetters Tottenham Hotspur and Liverpool, while Wolves rise to ninth on 14 points after nine games.

Wolves boss Nuno Espirito Santo was happy with a point.

“We try to be solid and we managed that. Let’s see if we play a back four again, (but) that’s not the point. We should analyse what we have and try to improve it,” he told Sky Sports.

Southampton’s good start to the campaign and Walcott getting on the scoresheet in the Premier League for the 14th straight season appears to have whetted the forward’s appetite for more.

“A lot of teams won’t want to play against us. We have trust as a unit, we want to play together and that’s the way we are. We want to win games,” added the 31-year-old.