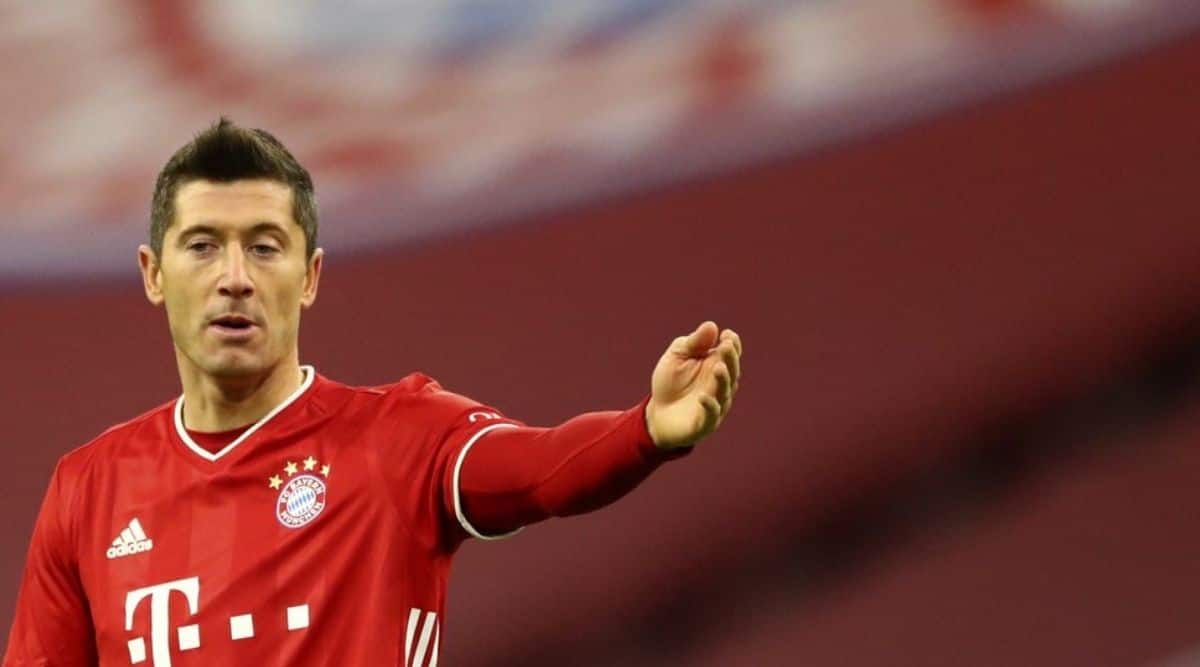 Bayern’s Robert Lewandowski reacts during the German Bundesliga match between FC Bayern Munich and SV Werder Bremen in Munich, Germany, Saturday, Nov. 21, 2020. (AP Photo/Matthias Schrader)Put Robert Lewandowski in that shrinking category of people who will look back on 2020 as a year to remember.

The year in which the Bayern Munich forward reached the pinnacle of European and world soccer.

At least all of the awards that weren’t canceled because of the coronavirus pandemic.

While the time-honored Ballon d’Or won’t be handed out for 2020, Lewandowski remains among the top candidates to win the FIFA best player trophy and the Globe Soccer player of the year honor.

“If you see what we did in this run it is amazing, spectacular — because we won everything that we could,” Lewandowski told The Associated Press in a telephone interview on Monday after being included in the nominations for Globe Soccer. “This is something special. … All of these awards are the prizes for something special.”

In early online voting for the award, Lewandowski was already ahead of Lionel Messi and trailing only six-time winner Cristiano Ronaldo.

Globe Soccer has also instituted four new awards to cover the period between 2001 and 2020 for “Best of the Century.”

Having already won the UEFA player of the year award for 2019-20, Lewandowski hardly seems bothered that France Football scrapped the Ballon d’Or during his career year.

“It’s not important, because it’s something extra,” he said. “If I win something, I’m very proud and very happy but I cannot get it. … Someone made the decision like that and life goes on.”

Trent Alexander-Arnold, a defender for Premier League champion Liverpool, is among those who have come out publicly saying that Lewandowski deserved the Ballon d’Or. Paolo Condò, Italy’s Ballon d’Or voter, wrote a long article recently explaining why he would have selected Lewandowski for the award, too.

“If you see how many people, also players, they know what I did, what we did, in this season,” Lewandowski said.

Poland’s Robert Lewandowski shoots on goal during the Nations League match between Poland and The Netherlands at Silesian Stadium in Chorzow, Poland, on Nov. 18, 2020. (AP Photo/Czarek Sokolowski)With 15 goals in 10 Champions League matches, Lewandowski’s scoring was a big reason that Bayern went undefeated en route to its sixth European Cup.

His 34 league goals came in 31 appearances. And his 55 goals overall were more than Ronaldo (37) and Messi (31) scored last season.

Lewandowski was also far more productive than his idol, former Arsenal great Thierry Henry, was during his peak seasons.

Still, that didn’t stop Lewandowski from recalling why he looked up to Henry as a kid while growing up in Poland.

“His movement was amazing. His finishing was amazing,” Lewandowski said. “So that’s why I was loving how he played, what kind of skills he had.”

Already this season, Lewandowski has 13 goals in 12 matches across all competitions — and Bayern is again undefeated in the Champions League. He attributes Bayern’s strong start — the club also leads the Bundesliga again — to the short turnaround between the Champions League final in August and the start of this season in September.

“We didn’t have so (much time) to think about what we did,” Lewandowski said. “That was only time to rest and stay on the same high quality of focus on the game and next season.”

Tommaso Bendoni, the CEO of Dubai Globe Soccer, praised all the athletes who continued to play amid the pandemic.

“This special edition is dedicated to all the protagonists in football who exposed themselves to the risk of the virus, gave up their vacations and rest in order to play every three days, traveled all around the world in order to offer millions of people a few moments of distraction,” Bendoni said.

At 32, Lewandowski was asked if he will finish his career with Bayern, the team he joined in 2014 from rival Borussia Dortmund.

“I don’t know,” he said. “Now I have the contract until ’23 and I never think what’s happening after. Two-and-a-half years more contract. So it’s a lot of time and I know that I can play longer but I have enough time to think about this.”