The defeat leaves United with only seven points from its first six games of the season with fatigue from the extended 2019-20 campaign appearing to play a role. 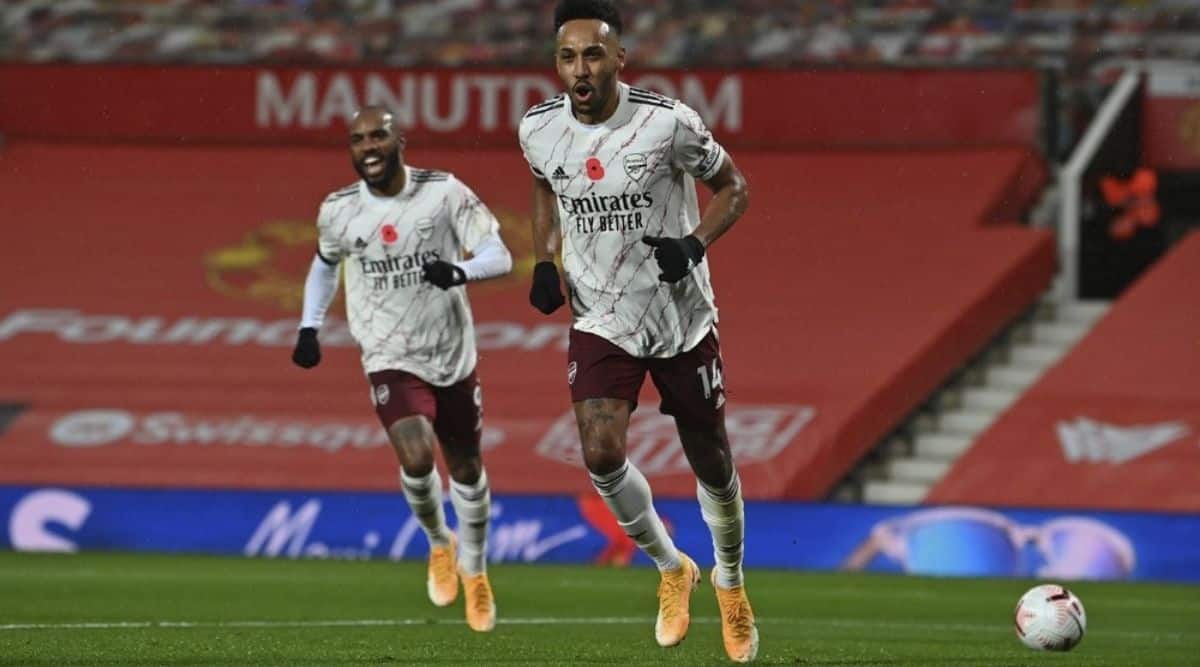 Arsenal’s Pierre-Emerick Aubameyang celebrates after scoring his side’s opening goal during the English Premier League match between Manchester United and Arsenal at the Old Trafford stadium in Manchester, England, Sunday, Nov. 1, 2020. (Paul Ellis/Pool via AP)Pierre-Emerick Aubameyang scored the only goal of the game from the penalty spot as Arsenal beat hosts Manchester United 1-0 on Sunday to secure its first win for 14 years in a Premier League match at Old Trafford.

With both teams playing a cautious game, a foul by United midfielder Paul Pogba turned out to be decisive when he kicked Hector Bellerin’s foot in the penalty area. Aubameyang sent goalkeeper David De Gea the wrong way with his 69th-minute spot-kick to give Arsenal the lead.

“It’s a bad afternoon. We just gave the ball away too much,” United captain Harry Maguire told Sky Sports. “If you give the ball away as much as we did, especially in the first half, you’re not going to win games of football.”

Arsenal hadn’t beaten United away since an FA Cup game in 2015, part of a longstanding run of poor form for the Gunners when facing England’s biggest clubs on the road. Arsenal’s last win at Old Trafford in an EPL game was in 2006, when Alex Ferguson and Arsene Wenger were the managers and current United manager Ole Gunnar Solskjaer was still playing for the club.

Arsenal had the better chances in a quiet first half Sunday, with Aubameyang narrowly missing a cross at the far post after a mistimed lunge, and Willian brushing the crossbar with a lob. Maguire could have given United the lead in the 55th but his header at a corner went just wide of the left post.

Arsenal needed a slice of luck to cling on to its lead when a mistimed block from Mohamed Elneny bounced off goalkeeper Bernd Leno’s head and onto the post before being cleared.

The defeat leaves United with only seven points from its first six games of the season with fatigue from the extended 2019-20 campaign appearing to play a role.

Arsenal moved closer to the Champions League spots following its first victory in three league games after losses to Manchester City and Leicester.

Back home: Bale gets his 1st goal, Tottenham beat Brighton

Tottenham’s Gareth Bale, centre, heads the ball to score his team’s second goal during the English Premier League match between Tottenham Hotspur and Brighton & Hove Albion at Tottenham Hotspur Stadium, London, Sunday, Nov. 1, 2020. (Julian Finney/Pool via AP)Gareth Bale scored his first goal since returning to Tottenham and sealed a 2-1 victory over Brighton that sent Jose Mourinho’s side second in the Premier League on Sunday.

Three minutes after replacing Erik Lamela in the second half Bale headed in a cross from Sergio Reguilon. Like Bale, Reguilon joined from Real Madrid in September.

Lamela was signed in 2013 to replace Bale at cost of a then club-record 30 million pounds (then $40 million) after Tottenham made 100 million euros (then $132 million) by selling the Welshman to Madrid.

It was match-winning moments like Sunday’s goal in the 73rd minute that Tottenham want to see from Bale on his homecoming and it wiped out earlier frustration.

Refereeing had favored Tottenham when a free kick was awarded after Adam Lallana fouled Harry Kane, only for VAR to see it upgraded to a penalty that Kane netted in the 13th.

But Brighton leveled in the 56th through Tariq Lamptey despite Tottenham’s Pierre-Emile Hojbjerg being fouled by Solly March in the buildup. After a lengthy review of the incident on a pitchside monitor, the referee appeared to determine that March got a touch on the ball so the goal stood.

Bale’s first goal for Tottenham since May 2013 gave the north London club its first home win of the season after losing to Everton and then drawing with Newcastle and West Ham after conceding in stoppage time in both games.

Tottenham is chasing a return to the Champions League after missing out on a top-four finish last season.

Callum Wilson scored twice as Newcastle beat Everton 2-1 in the English Premier League to extend Everton’s dip in form following a strong start to the season.

Everton went into the game second only to Liverpool in the standings but has now lost two league games in a row.

Wilson won a penalty when he was fouled at a corner by Andre Gomes and stepped up to convert the 56th-minute spot kick. Gomes appeared to injure himself while giving away the penalty with a clumsy attempted clearance and was soon substituted.

Wilson then combined with his former Bournemouth teammate Ryan Fraser to score the second as Fraser sped down the left flank on a counter-attack before crossing for Wilson to tap in.

Wilson has scored six goals in seven EPL appearances for Newcastle since he was signed from Bournemouth in the summer. That’s only two fewer than he managed in all of last season as Bournemouth was relegated.

Everton’s high-scoring striker Dominic Calvert-Lewin was a largely isolated figure throughout the game as Newcastle’s defense marked him out of the game, but he still managed to score his eighth goal of the season in stoppage time to give Everton hope.

Robin Olsen made his EPL debut in goal for Everton as regular keeper Jordan Pickford was rested. The Swede, on loan from Roma, went up for a stoppage-time corner and unsuccessfully challenged opposing keeper Karl Darlow for the ball.