The funds due from broadcasters Sky, ARD and ZDF and other television stations for the remaining matches of the season were one of the reasons for the Bundesliga to end its forced break. 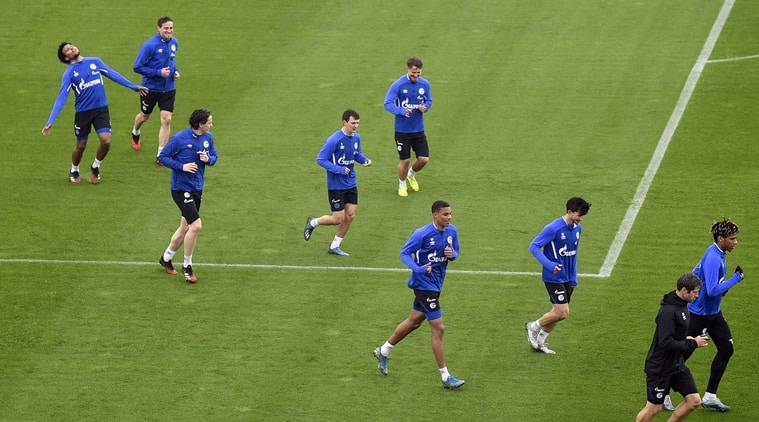 Schalke 04 players training ahead of the Revierderby. (Source: AP Photo)Germany’s Bundesliga will attract legions of new armchair fans around the world this weekend when it becomes the first of Europe’s major soccer leagues to resume after a two-month shutdown due to the coronavirus.

In normal circumstances, the German game, dominated in recent seasons by Bayern Munich, lacks the marketing pull of England’s Premier League or Spain’s La Liga, which boasts the world’s two biggest clubs in terms of revenue – Barcelona and Real Madrid.

Yet even with a subdued atmosphere given the absence of passionate fans, with all games being played behind closed doors to prevent the spread of the coronavirus, the Bundesliga can use the spotlight to show its worth to devotees missing live action around the globe.

“With the Bundesliga as the only league to be broadcast on TV, I expect we will have an audience of a billion,” Bayern CEO Karl-Heinz Rummenigge told SportBild magazine on Wednesday.

In Britain, BT Sport is showing all nine Bundesliga matches live this weekend, including the Ruhr valley derby between Borussia Dortmund and Schalke 04.

“Each team has nine or 10 league matches to play in order to complete the season and BT Sport will be with you every step of the way in what promises to be a thrilling climax to the season,” said BT Sport on its website.

In Scandinavia, all Bundesliga games will be available on the Viaplay streaming service with selected games on pay-TV channels, said NENT.

“We know how strong the appetite for live sport is, so we are delighted to offer top-class football to our viewers once again,” said a NENT spokeswoman.

Games will be played in empty stadiums with only about 300 essential staff and officials attending. Players have been told not to spit, celebrate in groups, or touch hands with teammates.

Some club will use music and cardboard cutouts of fans to liven up the atmosphere at matches and Sky aims to compensate its television audiences by offering recordings of fans’ gasps, cheers, and chants.

Highlights this weekend include league leaders Bayern away at Union Berlin on Sunday with Dortmund, four points behind the Bavarians, playing Schalke on Saturday.

Bayern, Dortmund, and Schalke are the only three German clubs to feature in the top 20 in the annual Deloitte ranking of soccer clubs by their revenues.

The funds due from broadcasters Sky, ARD and ZDF and other television stations for the remaining matches of the season were one of the main drivers for the Bundesliga to end its coronavirus-induced forced break.

In Germany, the DFL even granted the broadcasters a discount if they paid part of the agreed installments before the Bundesliga re-started.

The total amount involved is just under 300 million euros ($324 million) and without that some clubs in the first and second division could find themselves in financial difficulty in coming months.